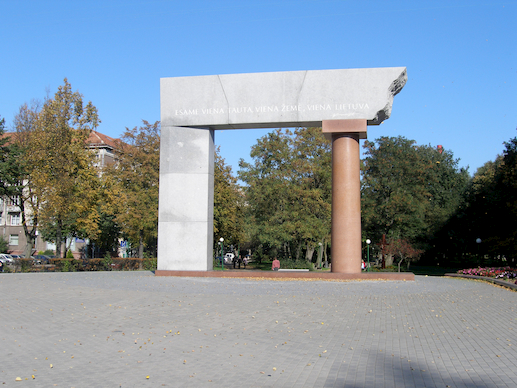 Arch, Monument to the United Lithuania

The granite monument Arka (“Arch”) in the small public garden near the Biržos Bridge was introduced at the beginning of August, 2003.
The monument is dedicated to the commemoration of the 85th anniversary of the Tilžė Act and the 80th anniversary of the joining of the region of Klaipėda with Lithuania. The construction weighs 150 tons, 8.5 metres high and is one of the biggest granite monuments in Lithuania.
The smaller red granite column is the symbol of Lithuania Minor and its cultural background, whereas the larger grey column is the symbol of Lithuania Major. On the monument, there is a quote from I. Simonaitytė, “We are one nation, one land, one Lithuania.” The upper, as if separated, part of the monument symbolizes the region of Kaliningrad, which now belongs to the Russian Federation. (Sculptor A. Sakalauskas)