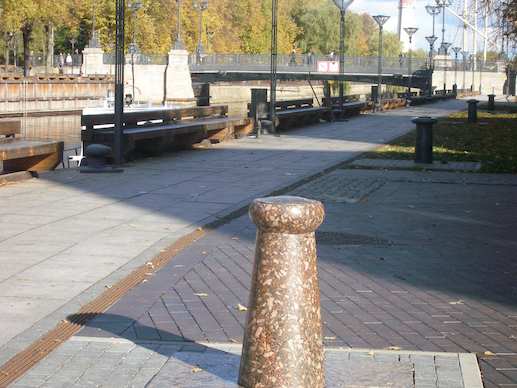 On the left bank of the Danė/Dangė river, six monuments – knechts or bollards – stand to commemorate Lithuanian maritime achievements.

The monuments honor the three yachts (“Lietuva”, “Dailė”, “Audra”), which, during the latter part of the 1980s, sailed through the Atlantic Ocean bearing the Lithuanian national flag.

One of the bronze decorated bollards honour Gintaras Paulionis, who in 1994, sailed across the Baltic Sea with a rowboat “Alfred Jensen”.

The newest bollard was built in 2009; it celebrates the millennium of Lithuania and the yacht “Ambersail” trip around the world.
“One name – Lithuania” was the motto of the crew. The sailing boat club “Ambersail” successfully finished the trip and established another milestone in Lithuanian maritime history.