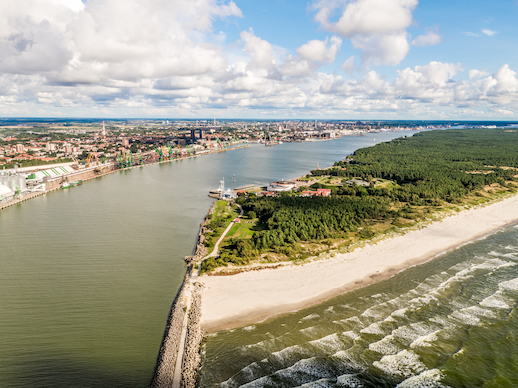 Smiltynė is the northernmost and one of the oldest settlements in the Curonian Spit. Smiltynė was first mentioned in 1429 as Sandberg – Sand Hill, and later renamed Sandkrug – Sand Inn. The name Smiltynė was first used in the 20th century. From the 19th century onward, Smiltynė with its beautiful, clean beach sand, and walking trails attracting holidaymakers, became increasingly popular as a resort location.

Kopgalis is the youngest place in the Curonian Spit, as the land strip here formed until the mid-19th century. For a long time, the peak north of Smiltynė was unnamed, and later Germans referred to the area as Suderhuk, Suderhaken, and much later as Siderite (South Cape, peak – promontory). The name Kopgalis is associated with Prussian Lithuanians of Klaipėda region, referring to the Spit as dunes, which is why at the end of the 19th century Lithuanian toponym Kopgalis was adopted.

1.Once you arrive at Smiltynė, you will see the landscaped dune “Sandkrug”, which was the site of the last post station in Curonian Spit as well as an inn with rooms for travellers. It was not the first place where a post station was located – the first one was closer to the lagoon. Nowadays, the inn’s homestead is called “Sand Inn” Hill.

2.Smiltynė Kurhaus is an impressive two-storey hotel with a mansard, built in 1900. The building, with its volume and unique architecture, is a dominant landmark in the southern part of Smiltynė. It had 50 rooms. Guests could enjoy warm baths and use the latest invention – electricity, in the garden there was a restaurant and on the lagoon shore – a café. Kurhaus is of a fachwerk architecture, reminiscent of some buildings in Klaipėda’s Old Town. Until the Second World War, Kurhaus was a prominent cultural centre in Smiltynė. It hosted music evenings, recitals by famous performers of the time, and operating roulette was available here. In the first decade of the post-war period, Kurhaus was equipped with apartments. Later, as the recreational importance of Smiltynė grew, the inhabitants were relocated, Klaipėda Hotel branch was opened along with Smiltynė Café.

3.Smiltynė Wellness Trail was established in 1989 on the initiative of Algimantas Laurinaitis. The goal of the trail was to attract as many people as possible to spend their time actively and healthily and to protect the Smiltynė forest from fires. Everything here is natural and made of wood. In 2012, Smiltynė Wellness Trail was renovated and is now awaiting visitors.

4-5.We call objects 4 and 5 the most popular beaches in Smiltynė. Wide beaches of white, soft, and even creaking sand attract many holidaymakers throughout the summer. Wide beaches not only make it ideal for swimming or sunbathing, but also for playing beach volleyball, tennis, ultimate and other active games.

6.The extant fortifications – “Jachmann” or “Memel Süd”. This defensive battery was named after German vice-admiral Eduard von Jachmann. The coastal defence artillery battery was built in the spring of 1939. The object is often described as “not extant” and was not given any attention for a long time. The four 150mm naval guns at this coastal artillery battery remained mounted only on temporary concrete platforms. A two-storey bunker was also built nearby as a fire control post. The bunker is currently in a poor state of repair and is not suitable for visiting.

7.Klaipėda port gates consist of southern and northern piers. This structure of port area protects the port from swelling, drift ice, and sedimentation. Klaipėda port has two parallel piers – the southern pier is 1227 m long and the northern pier is 1158 m long. Both piers are built on deeply hammered poles. The topside is made of stones. After the port was deepened, the piers were reinforced with stones and large concrete blocks. The northern pier was built from 1834 to 1884 and the southern pier from 1847 to 1861. The function of these piers is to divert the current of Danė river mouth into the Baltic Sea and to protect the navigable channel (fairway) from pollution.
Both piers are popular walking spots for city dwellers who come here to watch the sunsets, as well as arriving and departing ships.

8.Lithuanian Sea Museum and Dolphinarium. The only dolphinarium on the eastern Baltic coast was opened in 1994. It is home to the Black Sea bottlenose dolphins, which belong to the mammal class and the toothed whale suborder. Dolphinarium hosts entertaining, educational purpose events that introduce visitors to some of the most intelligent marine mammals. Since 2001, the Lithuanian Sea Museum dolphinarium has been running a special dolphin-child communication project – dolphin therapy, which helps children with various health conditions.

9.Nerija Fort. In the second half of the 19thcentury, a defensive seaside fortress, Nerija Fort, was built in Kopgalis, which was almost destroyed during the Second World War. In 1979, Nerija Fort was rebuilt and adapted to the needs of the museum. The exhibition of the navigation history of Lithuanian is displayed in the poterns and casemates under the fortress ramparts, and a collection of ancient and modern anchors is exhibited on the ramparts in the former gun emplacements. The museum collects, preserves, researches, restores, and promotes museum treasures that reflect the navigating history of Lithuania as a maritime country and the diversity of marine nature. Today you too can take a stroll through this historic fort.

10.„Albatrosas” (“Albatross”) – a monument dedicated to fallen sailors and sunken ships. The names of horrific tragedies and victims forgotten over the centuries and preserved in memory will always remind us of the dramatic relationship between man and the sea. Gulls and albatrosses – birds where, according to legends, the souls of sailors are reborn – hover over the graves of those who have not returned from the sea. The monument aims to bring the maritime community together. It has already become a symbol of Lithuania as a maritime country, and Klaipėda – as a maritime centre. The metal bird took flight, cherishing the hope that it will always be alive in the hearts of the sailors of Klaipėda.
(The authors of the monument – sculptor Klaudijus Pūdymas and architect Mindaugas Zabarauskas).

11.Ethnographical Fisherman’s Homestead was established in 1979. It was built according to the 19th– late 20thcentury homesteads of the seaside fishermen of Šventoji and Palanga surroundings. Such homesteads were not notable for their abundance of buildings, usually consisting of 2–3 buildings. Here you will be able to get acquainted with farm and residential buildings. This homestead depicts the wealthy fisherman’s – who raised animals, worked the land, and fished – homestead complex: the residential house, the barn, the granary, the sauna, the cellar and the poles for drying fish and nets.

12.The fishing boats on display at the Ship-Veterans exposition site include the trawler “Dubingiai”, a small fishing trawler “Kolyma”, and a steel trawl-boat (PTB – 7167). These ships have fished not only in the Baltic and North Sea but even in the Atlantic Ocean. You will also be able to get acquainted with the famous kurėnas “Süd.1” – a flat-bottomed sailing boat that was used for fishing in the Curonian Lagoon until the sixth decade of the 20thcentury.

13.Kopgalis village cemetery in Smiltynė was used until the 19th –early 20th century. The cemetery of Kopgalis is the burial place of the inhabitants of Smiltynė and Kopgalis: Liudvikas Stulpinas (1871–1934), the first Lithuanian Sea Captain, and Jonas Žilius-Jonila (1870-1932), a poet, publicist, and the governor of Klaipėda Region.

14.Klaipėda city government has settled permanent residents in Smiltynė to regularly maintain hydro-technical structures (piers, levees, loading bridges), improve ballast unloading works, and curb the sand in the Spit’s peak. They spoke Curonian-German or Curonian-Lithuanian-German languages. In the second decade of the 20thcentury, Kopgalians worked mainly in the town.

There were already 7 homesteads in 1821. The inhabitants loaded ballast, fortified the banks, covered them with turf, fished, and grew potatoes. You can still see today the old villas of Smiltynė with their folk architecture elements. Some villas are entirely wooden, and others are of fachwerk construction. The preserved villas in Smiltynė were built in the early 20th century.