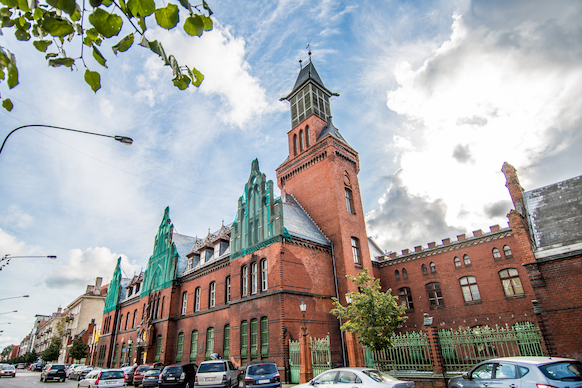 Liepu street developed on the right bank of the Danė river in the 17th century. The new street later became popular with the aristocrats and rich merchants of the city. There are many buildings of different styles (jugend, neo-gothic) showcasing different periods they were built in.
One of the most elegant buildings in Klaipeda is the red-brick Post Office. It also used to be one of the most important institutions, as the city had much traffic (both sea and land) from Russia and Europe and thus, it was often frequented by merchants, tradesmen and sailors who needed to communicate with business associates, friends and family abroad. The Post Office moved into this red-brick neo-gothic palace, built in 1893, in the 19th century, when the Ministry of Interior of the Kingdom of Prussia gifted it to the Ministry of Sales and Commerce. The Post Office was officially opened on June l, 1864. A carillon of 48 chromatically-tuned bells was installed in the reconstructed tower in 1987. The first bell concert was held on 13 November, 1987. At noon on every Sunday, they play for 30 minutes.