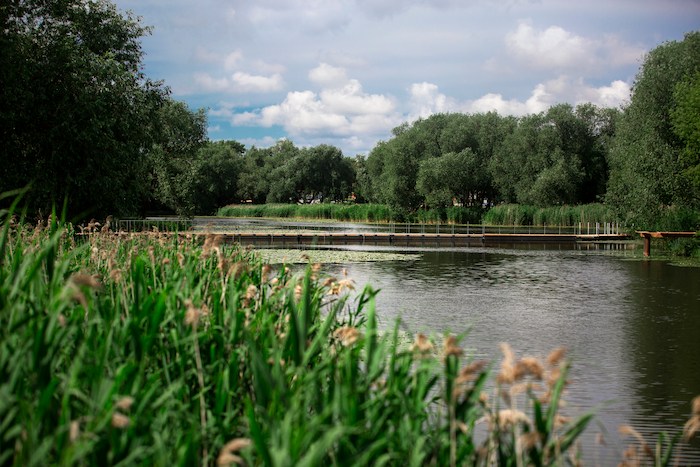 Until 2017, the Mill Park and Pond were called Trinyčiai Park. It is one of the most picturesque parks in Klaipėda city. The most important feature of the park is Mill Pond.

The oldest part of the park since the 16th century is called the Mill Pond (in German – Mühlenteich), because opposite the pond, on the corner of Bangų Street and Gluosniu alleyway, there is the old mill building. It is mentioned that there used to be a Danė river branch which was later separated by a dam, and a pond formed in that place. In the 18th century, this territory was the site of Joniškė (in German – Janischken), Būtsargiai (in German – Budsargen) and Justenhof manors.

Because near this place was “Trinyčiai” spinning factory, the Mill Pond began to be called Trinyčiai Pond or Trinyčiai Lake by the locals. Later, the name of the lake was adopted for the newly established park.

Today, there is a wakeboarding park “Wake – Star” in the pond that features two new, modern tracks with water figures. A new bicycle trail extends through the park. Here you can have a picnic and swing on the swings. On the western shore of the pond there is a cozy café as well as leisure supplies and equipment shop (oriented towards wakeboarders). Beautiful views, which are perfect for enjoying the moment, open up from this spacious terrace.